Please note that v4 demo users will need to re-register to access the v5 demo.

The Arches demonstration site has been created so those interested can get a hands-on experience with Version 5 of the platform.

Arches v5 has many new features and enhancements compared with v4 (see Roadmap). However, because the demo site has not been customized for any particular implementation some of the v5 upgrades will not be evident when using the demo site—e.g., the new workflow functionality in v5 would need to be customized for individual use before it can be used. Improvements such as the new enhanced interface and the ability to export search results are available and evident in this demo site. The ability to use this demo site to try Arches Collector will be introduced shortly after the next version of the mobile app is released.

The test data in the demonstration version of Arches has been assembled from various sources, in particular:

For a tutorial on how to use the Arches v5 Demo, click on the video link below for the Arches webinar on the v5 Demo with Q&A, presented in August 2020: 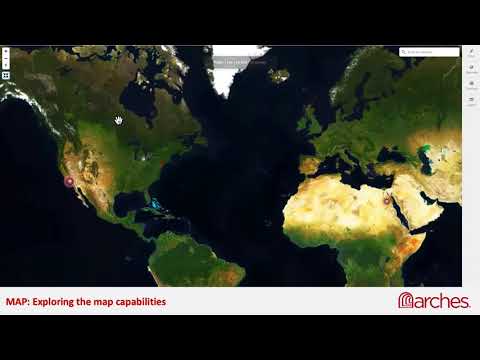 For the full transcript and slide deck of this webinar and to view other webinars, please visit the Arches Videos page.

The Arches v5 Demo site is currently available at http://v5demo.archesproject.org. Visitors without login credentials can search the demo’s data by navigating through the new search and discovery interface.

This demonstration version of Arches will be refreshed monthly (according to schedule below) and all data added to the system WILL BE OVERWRITTEN DURING THAT PROCESS WITH NO POSSIBILITY OF RETRIEVAL. Also, please be aware that any information entered by you will be viewable and editable by all users of the demo version.

User profile information, including login credentials, will also be refreshed according to the schedule below. After each refresh date, you may create a new account.

To stay informed about the Arches platform (including any new information regarding this demo), please like our Facebook page, follow us on Twitter, or join our LinkedIn page. If you have any questions regarding Arches, please visit the Arches Community Forum, where you can search for answers or post new questions.

If you are looking for the Arches v4 demonstration site, please click here.

If you are looking for the Arches v3 demonstration site, please click here.